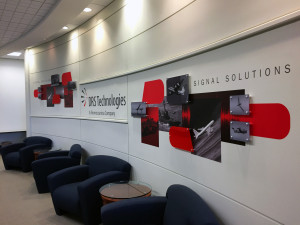 Germantown, MD – March 25, 2015.  DRS Technologies has moved 250 employees into 1 Milestone Center Court in Germantown, Maryland, after completing over 3 million dollars in renovations to the 133,140 square foot building.  DRS signed a long-term lease with Matan Companies in February of 2014 as part of an area consolidation that included relocation from their aging manufacturing and engineering facilities at 700 Quince Orchard Road in Gaithersburg. DRS began the extensive renovations in June after JDSU relocated to 20250 Century Boulevard in Germantown.

DRS’ new Germantown facility will house DRS Signal Solutions, together with personnel from other DRS divisions. “DRS is a great addition to the Milestone campus,” said JP Matan, Director of Leasing for Matan Companies. “Their long-term commitment to Germantown and anticipated expansion is a boost to the I-270 Corridor.”

DRS Technologies is a leading supplier of integrated products, services and support to military forces, intelligence agencies and prime contractors worldwide and is a two-time recipient of the Defense Security Service Award for Excellence in Counterintelligence as well as three James S. Cogswell Awards for Outstanding Industrial Security Achievement. The company is a wholly owned subsidiary of Finmeccanica SpA, which employs approximately 70,000 people worldwide.